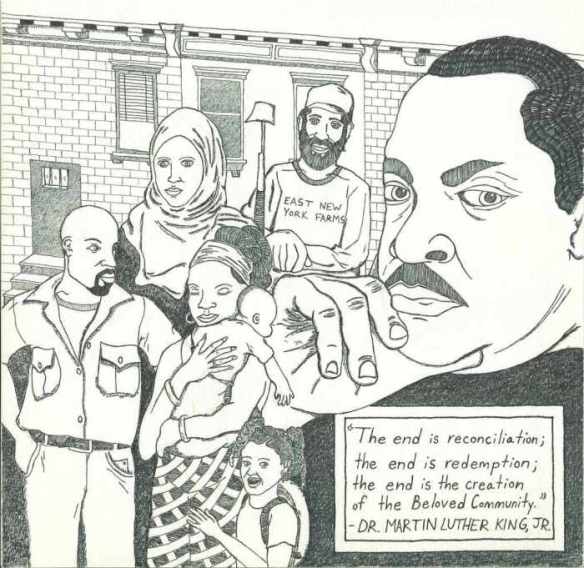 The Beloved Community by Christopher Barret

Among Dr. Kings most compelling visions is that of a Beloved Community – a community in which people of different backgrounds recognize that we are all interconnected and that our individual well-being is inextricably linked to the well-being of others. Dr. King knew that the goal of social change is not tolerance alone, or even the recognition or enforcement of human or civil rights, or an improved economic condition. These are necessary but not sufficient steps in the path to human progress. We cannot rest until we have bridged the divides of prejudice and mistrust that lie within the human head and heart. Invariably, these final, resilient divisions are social and personal. Dr. King reminds us that reconciliation is both a process and a final destination. The road to the Beloved Community is the difficult road of reconciliation among people who have been in conflict and negotiation. The Beloved Community is reconciliation achieved – a profound human connectedness, a transcendent harmony and love among all people.

“Desegregation is only a partial, though, necessary, step toward the ultimate goal which we seek to realise. Desegregation will break down legal barriers, and bring men together physically. But something must happen so as to touch the hearts and souls of men that they will come together, not because the law says it, but because it is natural and right. In other words, our ultimate goal is integration which is genuine intergroup and interpersonal living. Only through nonviolence can this goal be attained, for the aftermath of nonviolence is reconciliation and the creation of the beloved community” MLK – 1968

“I do not think of political power as an end. Neither do I think of economic power as an end. They are ingredients in the objective that we seek in life. And I think to that end or that objective is a truly brotherly society, the creation of the beloved community” MLK – 1966

A particular young boy in our after school programme at Lawley Primary, loves City Year and always tells his mother, who works at the school, about the activities he does with us. One day his mother, Mrs. Kgosana, came up to us at lunch and said, “Just know that we as parents and the community are really grateful for what City Year is doing for our children. My son who is in grade 6 cannot close his mouth about how good and helpful you are to him.”  She then kindly asked why City Year is not in high schools and we replied, laughing, that the answer to that question was above our pay grade. Mrs. Kgosana started telling us about Nomathemba, her 16 year old daughter in grade 10, who was failing maths. She asked us, “How can you help me to help my child out of this misery?” We said that we would think about it and talk it through with our Site Leader Alexi, to see if there was anything we could do to assist.

The next day as we were about to wrap up, we heard a knock at the door and saw Mrs. Kgosana standing there with her daughter at her side. She said, “I am leaving her with City Year. See what you can do.” We were shocked and confused.  We had not said yes, or even had the chance to speak to Alexi! But, we decided on the spot that we were going to help this girl, even if it meant staying behind every day after our work with City Year was complete. We decided to initiate our own programme, which would run immediately after the City Year Children’s Club, between 4:30pm and 6pm. Without wasting any time we started tutoring the young girl the same day that her mother brought her to us.

First we motivated her, and made sure that she started off with a positive mindset. Then we started with the basics. As time went by we watched her progress. She came to us for help with her own sums that she was working on at home, and also the ones that she got at school. Nomathemba stayed motivated and slowly started to love maths. We continued working with her for about 5 weeks, until she could no longer attend because her school had started their own after-school programme. When she left, we asked each other whether we had made any difference in her life.

Shortly after we stopped working with Noma, while helping in the schools kitchen, Mrs. Kgosana told us about how disappointed she was that her daughter could no longer attend our classes.  But she smiled at us and said “For the first time bafana bami bengiqala ukubona uSbongile ezimisele ngomsebenzi wakhe wesikole kakhulu ngezibhalo” which means “For the first time in my life, I have seen my daughter practicing maths and taking her school work seriously”. We smiled and both said, “WE HAVE MADE A DIFFERENCE.” We managed to change Noma’s attitude towards learning, as well as her negative mindset towards maths, and we have given her mother new hope that her daughter will make it.

Errol Radebe and I recently had the privilege of representing City Year South Africa at City Year’s annual Summer Academy in Boston, Massachusets. Summer Academy is a time for the organization’s staff and senior corps members from around the network to come together for a period of intensive and productive learning, networking and fun. Since its beginning in 1993, Summer Academy has served as a vehicle for leading organizational change and sharing and cultivating our organization’s strong culture and best practices, while aligning on our collective, mission, vision, strategy and goals.  Summer Academy’s theme is “Learn. Lead. Transform.”

The goals of Summer Academy are:

•To connect staff and senior corps members as a united workforce of practising idealists, and begin to build bonds and networks among City Year’s communities of practise that will serve as an ongoing learning resource throughout the year. Approximately 1000 staff were in attendance and 300 workshops were held over 6 days from 16-21 July.

It took Errol and I roughly two days to travel from Johannesburg to Boston, and we were tired when we arrived, but the spirit, inspiration and energy we felt from our colleagues in the US, really made the jet lag seem minor in comparison. The week was intense, filled with workshops, reflection and sharing, and the Summer Academy team did not disappoint. They infused spirit and fun into everything that we did. In between all the hard work, we had an amazing talent show, where staff and corps members from around the network displayed a multitude of abilities and gifts, and we were warmed up everyday with some great Physical Training. One of my favourite moments from the week was receiving the Ubuntu(My Humanity is Tied to Yours) Boot. This acknowledgement arose from a week long campaign to acknowledge staff and senior corps who displayed City Year Values. 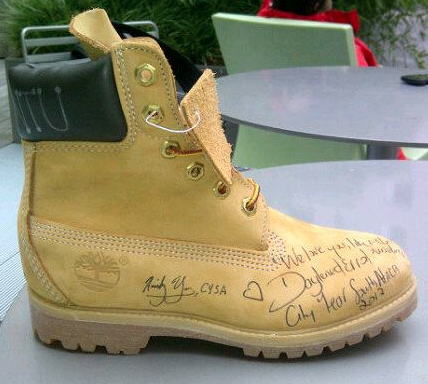 Errol and I were also lucky enough to get some one-on-one time with City Year CEO and Co-Founder Michael Brown. We talked about how important it is to grow City Year globally, and Michael re-affirmed that as staff we all have a big responsibility to grow and improve City Year, so that it can effect even greater change in the lives of others. Having learned so much and acquired so many new tools, we are bursting with excitement at the prospect of using them to grow City Year South Africa in 2013!

Errol and Daylene with Michael Brown